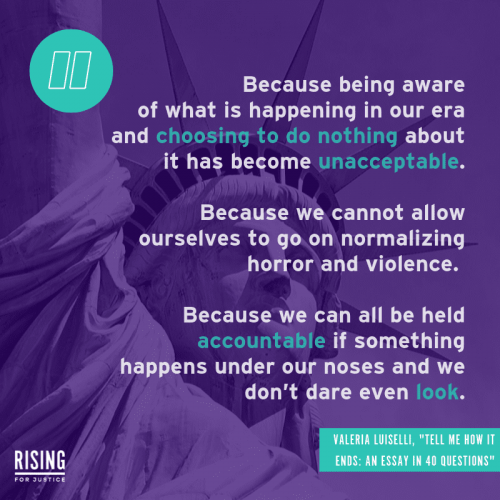 In Morton, Mississippi, earlier this month, 680 undocumented immigrants were detained at their place of work. Children came home from school to empty houses. Some parents were immediately carted off to ICE detention. Others were released with ankle monitors, marking them as criminals. The horrors endured that day by hundreds of immigrant mothers, fathers, and children have been publicly likened to Japanese American internment and Jewish concentration camps. Rising for Justice refuses to let this neglect and violence against these families and communities go without advocacy.

Rising for Justice’s Immigrant Defense Program, the first program to use the universal representation model[1] for bond and custody proceedings, was formalized in response to the Trump administration’s aggressive policies towards immigrant communities and the rapid increase in ICE detention. Unlike defendants in criminal court, immigrants who are detained have no right to a court appointed attorney during their immigration proceedings. We believe this is a travesty, as the stakes in immigration court are extremely high, often higher than those faced by criminal defendants as it can result in indefinite detention, permanent separation from families, and potential death upon return to the country of origin. The Supreme Court has previously said “[p]reserving the client’s right to remain in the United States may be more important to the client than any potential jail sentence.”

Shortly after taking office, the Trump administration quickly established itself as anti-immigration by making plans for America to cut aid to Latin American countries, build an unnecessary wall along the Southern border, and end benefits such as Deferred Action for Childhood Arrivals (DACA) and Temporary Protected Status, for immigrants already within the country. Look no further than President Trump’s twitter account, and one will find a President who openly campaigns against the original premise of America’s founding — the land of the free, where anyone can attain life, liberty, and the pursuit of happiness.

Anti-immigration sentiments have been not only the backdrop of President Trump’s administration but undoubtedly the motivation for both the ICE raids in Mississippi and around the country.[2][3] The systematic elimination of hardworking people fleeing violence and insecurity, and seeking protection in the United States cannot be ignored, and the rhetoric used against immigrant families simply cannot continue.

At Rising for Justice, we agree with the Supreme Court’s finding that the threat of deportation is one of the most severe penalties a person can face under the law, as it often includes physical exile from one’s home, permanent separation from one’s family, loss of employment, loss of community, inhumane detention conditions, and potential violence or death upon return to the country of origin. The severity of the consequences in immigration court, in our opinion, demands legal representation. To meet this need, we offer free representation for every person being held by ICE seeking release and facing imminent threat of deportation. We also have a confidential hotline to our offices from area detention centers and also provide bond assistance, brief legal representation for those who have won release, as well as pro bono psychological evaluations for immigrants and their families

ICE acting director Matt Albence has claimed that the raids on the chicken processing plants were part of a “long-term operation” and that the companies that had hired undocumented workers could be charged and further investigated for fraud. He said the raids were “racially neutral.” When interviewed by CNN Albence said, “These are not new laws, nor is the enforcement of them new.” Admittedly, it is true. The use of ambiguous laws against those with limited access to legal counsel, limited rights, limited knowledge of their rights, and limited power has been the method by which our legal system has historically functioned to the detriment of all minority groups. When looking at these events — not as individual and separate events but as pieces coming together to create a whole — it is clear that the system is both historically consistent and historically unjust.

And as days go by, the evidence becomes more and more prevalent. On August 22, the ACLU reported that US citizen Ramon Torres had been detained by ICE in Louisiana simply for being Latinx. He had both valid documentation of citizenship and a court-ordered release. In a blatant show of racism and xenophobia, staff “explained that they had a policy of detaining all Latinx people for immigration review”.

If we take the time to look at America’s history, at our past, present, and potential future, we understand that advocating for immigrants is not a favor, it is an obligation. At Rising for Justice, the obligation to advocate on behalf of those who strive to enjoy the freedoms and liberties guaranteed by the American Constitution, is one we take very seriously and one we will continue to fight for until the day that everyone who inhabits this land receives equal and fair justice.

To donate or help please visit us at https://risingforjustice.org/support/

[1] Universal representation means representation for all, similar to a public defender where anyone in need of representation has access to qualified legal counsel, which establishes a critical check on the immigration enforcement system.

[2] The violent attacks on largely Hispanic and Latinx communities, like the recent tragedy in El Paso are also not to be forgotten.